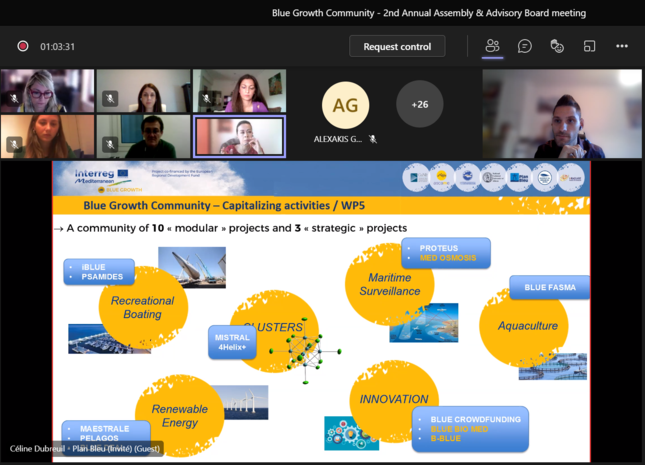 The Blue Growth Community organizes its 2nd Annual Assembly and 3rd Advisory meeting with a high participation of its members.

On the 12th October 2021, the Blue Growth Community, represented by the core members of the Interreg MED Blue Growth projects, the Blue Growth associated partners, as well as other relevant stakeholders, gathered online to discuss on the Community’s already realised and planned activities and joint actions.

It was a great occasion for the Blue Growth Community to meet with its members, give the floor to new projects to introduce themselves, and at the same time, to go further in the transferring and mainstreaming process of the Blue Growth projects’ results dealing with relevant issues, mainly in the marine renewable energies, blue economy and maritime surveillance sectors. It was also the opportunity to present and officially approve the Community’s Position Paper produced as a reaction to the European Commission’s Communication on a new approach for a sustainable blue economy in the EU Transforming the EU's Blue Economy for a Sustainable Future.

During the first part of the Annual Assembly, the past and future activities of the Blue Growth Horizontal Project regarding ‘capitalisation’, ‘strategic liaising’, ‘transferring’, ‘community building’ and ‘communication’ were presented.

The second part of the Annual Assembly included:

●     a survey on the Community’s upcoming activities in order to get the feedback and reactions from the Community's members;

●     the presentation of the Blue Growth Community's Position Paper (in reaction to the EC’s Communication on Sustainable Blue Economy) which was approved by the members of the General Assembly and;

●     an introduction to three of the Blue Growth Community’s projects which were not presented in the 1st Annual Assembly, namely Psamides and the 2 newly approved strategic projects on Innovation, i.e., BLUE BIO MED and B-Blue.

In the afternoon of the same day, the 3rd meeting of the Blue Growth Community’s Advisory Board took place. The meeting focused on the activities foreseen in the context of the thematic Working Groups established to support capitalization objectives. The Advisory Board meeting was structured around the sessions briefly presented below:

The activities of the Working Group dedicated to Marine Renewable Energy formed in October 2021 were presented to the Advisory Board. During this session, the members of the Advisory Board were requested to take advantage of their “advisory” role and contribute with new ideas and suggestions, focusing on the need to enhance interactions among the members of the Working Group.

The upcoming establishment of the Working Group on Blue Economy was highlighted in this session, by communicating the available tools offered by the Blue Growth Community’s projects and the proposed path (action plan) towards their capitalization.

This session focused on the reflection on the future of thematic activities on Maritime Surveillance. Moreover, the Montenegrin partner of the Blue Growth Horizontal Project (University of Montenegro) shared an initiative for the formation of a Cluster on Blue Economy in Montenegro applying methodologies offered by the Blue Growth Community’s projects for the development of clusters (PELAGOS and PROteuS projects).

The above-mentioned sessions included surveys receiving real-time feedback and suggestions for enhancing the operation of the thematic Working Groups.

The Advisory Board concluded with the presentation of the Community’s next steps. The Blue Growth Community invited its Advisory Board members to attend its next conference entitled “MED BLUE ECONOMY IN ACTION – Blue Business tools for SMEs”, taking place online on the 19th of November 2021, in the framework of the Mediterranean Week of Economic Leaders (MedaWeek), as well as the foreseen Capitalization events (2nd Capitalisation event on Cruise and Recreational Boating planned for early 2022 and 3rd Capitalisation event on Blue Economy planned for the summer 2022).

Check out the pictures and the presentations of the event!